The video is more than 1:30 hrs long so I decided I was going to watch it offline. Several attempts to download the video from YouTube failed but I managed to find a workaround.

My first attempt at downloading the video on macOS using youtube-dl led to the following error:

I was too impatient to try to figure out why the download failed, so I SSHed into a spare Ubuntu Linux VPS I had running on AWS and installed the youtube-dl binary. This second attempt also failed. The error message was identical to the error I was shown on macOS.

A quick check revealed that I had version v2021.12.17 of youtube-dl installed on both macOS and Ubuntu.

Then, I remembered that the open source project for youtube-dl had been having management issues. Collectively, these issues led the community to shift their focus to an actively maintained fork called yt-dlp.

So, I downloaded the latest binary for yt-dlp which was released on GitHub only a month ago. The download also failed. The error output from yt-dlp was identical to the output above from youtube-dl.

Slowing Down to Diagnose the Error

Based on the hint contained in the error, my next suspicion was that there was some kind of mismatch between the HTTP range request that youtube-dl was sending and what YouTube's servers were expecting.

I condensed the error down to the following string and did a quick search on Google:

Although there were no results for my query, Google did helpfully include 4 screenshots, two of which linked to GitHub. I clicked through to the first image which led me to this closed issue on the youtube-dl project.

This comment, left in 2017, provided a valuable hint: that the issue is from YouTube and not due to a bug in the youtube-dl code. The workaround is to use a different format.

Since I didn't specify any format in all of my attempts, I decided to skim the CLI arguments supported by youtube-dl so I could specify a format explicitly.

Armed with this information, I turn on verbose mode (with the "-v" option) and passed the "-F" option to youtube-dl so it can list the video formats supported by YouTube for the video in question:

It turns out that when I don't explicitly specify a format, youtube-dl defaults to downloading the last format in the list (format code: 22; file format: mp4 at a 1280x720 resolution).

It seems there's problem with how that video format is encoded/served by YouTube's servers because any attempts to download it explicitly leads to the error I mentioned above. (Highly likely that YT has checks in place to surpress encoding errors when videos are consumed normally by a human.)

Once I picked the mp4 format at a lower resolution (format code: 18, file format: mp4 at a 640x360 resolution), the download worked fine. The command I used was: 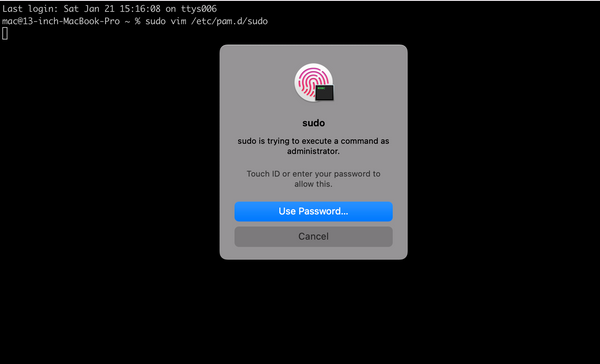 About five months ago, I followed the steps in this article: Use TouchID to Authenticate sudo on macOS via HN so that I could use my fingerprint to complete actions

Getting a recent version of delv working on macOS is as easy as "brew install bind".